We are facing a climate and ecological emergency. Movements such as Animal Rebellion and Extinction Rebellion have sprung up to resist the callous and self defeating short-termism of our governments. Through bold and brilliant direct action the CEE has been put on the agenda but the result so far seems to be more green-washing and green capitalism which equates to business as usual and the continued destruction of the world.

While the national uprising we’ve been working towards has yet to materialise, a glimmer of hope is provided by the emergence of hundreds of local groups mobilising to protect green-space across the UK. This presents national movements such as XR with an opportunity to find common cause with local communities and build the mass movement we desperately need. Replicating the Ryebank model nationwide has the potential to grow a movement powerful enough to bring about system change. 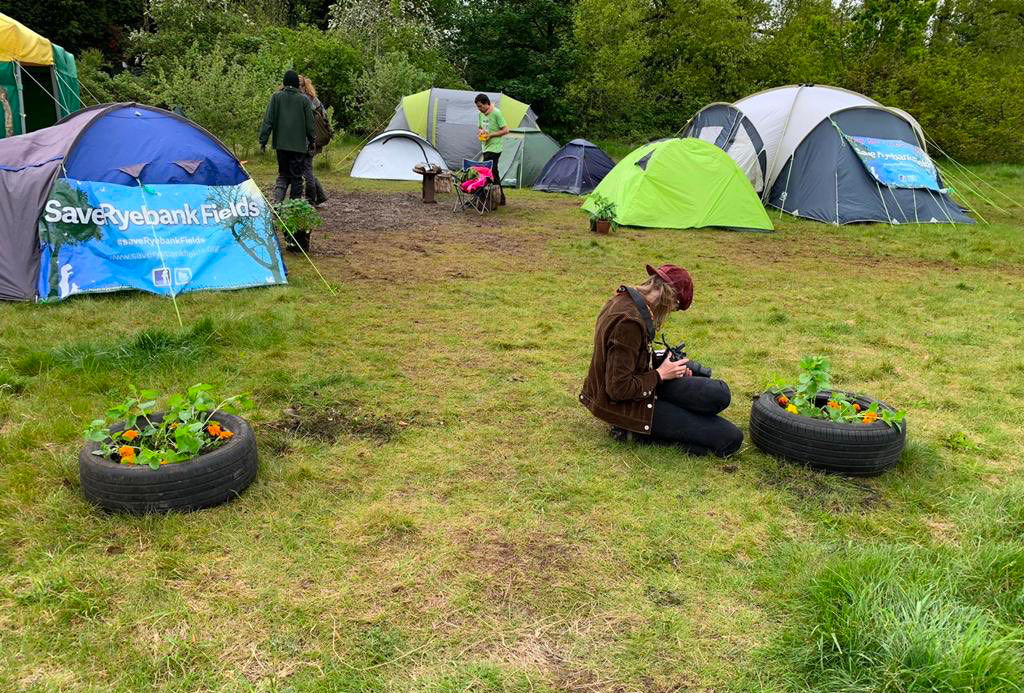 On the 24th of April, the anniversary of the mass trespass of Kinder Scout, a protest camp was established on Ryebank fields by Animal Rebellion and Extinction Rebellion. It was originally going to be kept going for a week but it’s success and popularity were so great that it has been decided to continue the camp indefinitely.

The Friends of Ryebank fields have put tireless work into exploring every possible angle to save the fields with a mass petition, a legal fund, group tours, artwork and endless freedom of information requests. In spite of this Manchester Metropolitan University (MMU), “one of the greenest universities in the UK” is still hell bent on selling the land to developers. Direct action is urgently required and so far the impact has been overwhelmingly positive.

The presence of the camp has drawn the attention of passers-by who were otherwise unaware of its threatened status. Some thought the battle had already been won while others thought the fields were already sold. There have been countless offers of assistance and kind words of support from passers-by. Local residents have provided hot water, home cooked meals, gazebos, tools and materials.

The overwhelmingly positive response from the local community has made camping here a truly delightful experience in spite of persistent rain. Having a physical presence on the field has galvanised the local campaign to save the land as those previously on the periphery of the movement have felt compelled to support the camp.

It has renewed the forces of rebellion as activists who were sick to death of endless zoom meetings have had the chance to live together and connect with nature. The bonds forged and strengthened on camp have made taking direct action easier and more effective. The presence of a camp in such a beautiful space has drawn in wandering free spirits resulting in thoughtful conversations and exciting musical collaborations.

The full potential of the Ryebank fields protest camp has yet to be realised and there are exciting plans to further embrace, enthral and empower the local community.

We Still Need a Mass Movement

The national movements of rebellion aim to mobilise 3.5% of the population to achieve system change. So far the model has been to engage people with the heading for extinction talks and then empower them with NDVA training. This has proved successful but not on the scale required. The complexity of the climate and ecological emergency makes it difficult to convey to an unprepared audience.

By contrast, protecting local green-space is something everyone can understand intuitively without recourse to graphs or statistics. We instinctively relate to nature on an emotional level which means there is genuine grief and anger when it is being destroyed for profit, especially if this is happing right in front of our eyes rather than on a screen. The existence of so many groups committed to protecting green-space is evidence of this. Block a road and there will be vitriol and frustration but block a development and there is solidarity and support.

Having a protest camp demonstrates that we are not powerless and that the destruction of these places is a preventable crime not an inevitable tragedy. A conversation about green-space can join the dots between environmental destruction, profit, industrialisation and colonisation; protecting it is the perfect introduction to ecological thinking. A permanent physical presence on threatened land is a space for conversations to take place, it makes us approachable to the public, lapsed rebels and those keen to get involved but unsure where to begin. Social media has its uses but there is nothing as rewarding as a face to face conversation. What people experience directly will resonate more deeply than online content. Viewing is not the same as seeing. 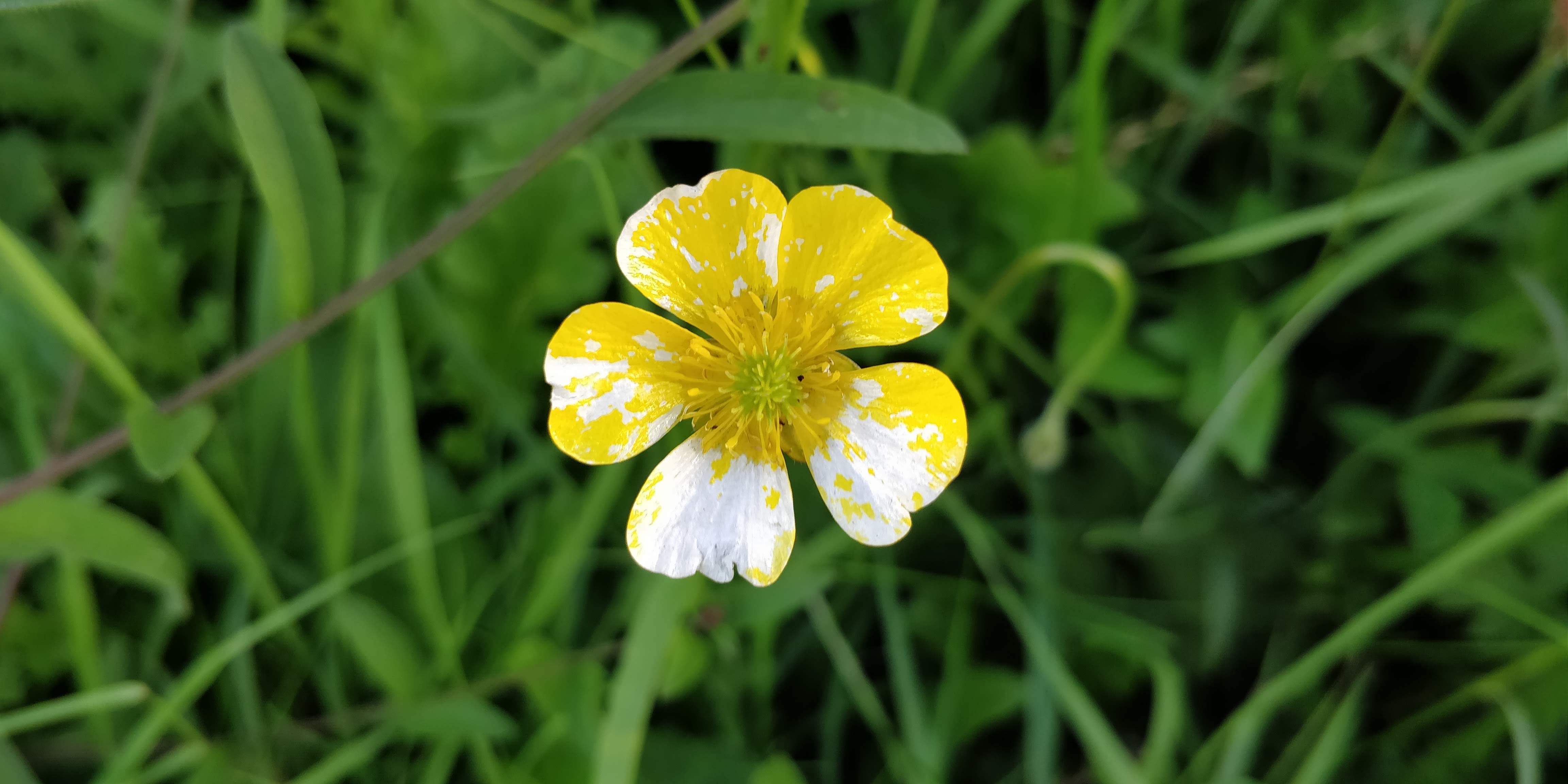 Being in contact with nature relieves stress and anxiety. Living outdoors surrounded by birdsong and greenery can provide a much needed antidote to the pressures of activist life and the remorseless, dehumanising treatment of people by the workplace and the state.

We are living beyond our means. Our civilisation is powered by fossil fuels which are finite and a disaster for the climate. We are using up the renewable resources of the world faster than they can be replaced and we need to drastically reduce our consumption.

We do not exist to be units of production, meet targets or comply with illogical rules and regulations. It is not natural for us to live as isolated individuals in competition with each other. For almost the entirety of our existence, humanity has lived in small groups who depend on each other and a deep understanding of the land for survival.

By gazing into the flicking flames of a campfire we experience the calming and hypotonic power that captivated our ancestors. When we forage for food we eat the same plants that have sustained us for millennia. When we live in a community we feel the safety and belonging that is felt by humans who live the way we evolved to live in line not just with ancient humans but with our non-human ancestors such as Homo erectus and Homo habilis stretching all the way back to the roots of the tree of life.

Our present way of living regulated by machine time, powered by fossil fuels and enforced with violence. It is an aberration that has nothing to do with who we truly are. Living on camp gives space for idleness, reflection and creativity. This treatise was conceptualised on Ryebank fields, unprompted. By freeing the mind from the shackles and distractions of the technological age we allow ourselves to find true purpose.

Picture in your mind hundreds of protest camps across the UK resisting development, bonding with communities and challenging our fossil-fuelled, growth-obsessed culture—those camping at Ryebank have taken the first steps. This has been written as a call to action, it’s not a how-to guide. If you’re wondering how to go about setting up a protest camp to protect a piece of nature you love the best way is to start talking to people. Talk to the local group resisting the development. Talk to fellow activists who have ideas and experience. The camp at Ryebank fields has only just begun to reach its potential by linking a visible and emotive local issue to the global extinction crisis.

How to revitalise a national movement...

Ryebank community camp has survived one of the wettest Mays on record with the help of the locals. It sees itself as a blueprint for radically inclusive comm...

Our XR MCR Media and Messaging team are looking for support!

Extinction Rebellion Manchester will be taking part in a non-violent direct action outside of Boohoo’s offices on Dale Street in the Northern Quarter.